We haven’t slowed down much since we got back in town last Sunday.

Saturday we woke up early (it’s hard not to do when the sun shines right into our bedroom), we live on the top floor and the windows are pretty much on the roof, so we get nature’s wake up call every morning around 5:30-6am.

We hopped on our bikes and headed to the New Farm Farmers Market. This farmer’s market is only a 15 minute walk/5 minute bike ride from our apartment right down the river, unfortunately it only happens twice a month- so we try to take advantage of the weekends it is here.

We have really mastered the art of showing up right at the end of markets (or after they’re over because someone read the website wrong…) BUT Saturday we headed up there early and it was nice to not feel rushed.

These pictures are actually from a couple weeks ago at the same market. 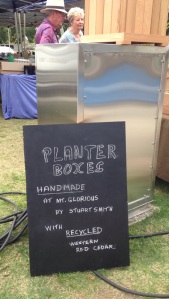 Shout out to Stu Smith

Disregard the lovely trash can 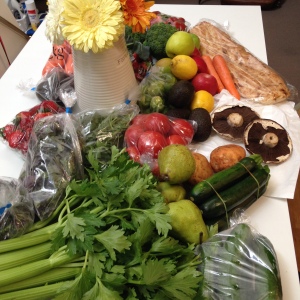 Typical loot of fresh veggies and fruit for the week

Saturday was a busy day in Brisbane- it was the AFL (Australian Football League) final game and Riverfire. We met up with our friend Gabe at a pub to watch the game. I use the term “watch” loosely because I was more concentrated on chatting and drinking my beer.

Then we headed up to Gabe’s apartment to get ready for Riverfire. Riverfire celebrates the end of a month long arts festival called the Brisbane Festival. It’s a HUGE 30 minute fireworks show that lights up the river and downtown area. It starts off with helicopters and fighter jets swooping and diving through the sky and right by where we were perched on Gabe’s balcony.

Sidenote: They practiced these flights on Friday and I could hear it very loudly from my apartment. It literally scared the crap out of me. I thought I was being bombed.

The fireworks show itself was nothing like I have ever seen. Here are some crappy iphone pictures to give you an idea (we really need a camera)…

We also made new friends, shared the glory that is seven layer dip (I made this recipe- delicious!) and had a great time. 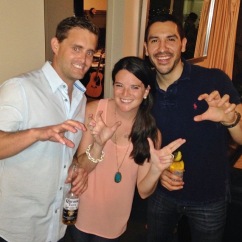 Sunday morning we got up bright and early once again to go whale watching. But not before I tried to facetime with this gorgeous bride:

Unfortunately Facetime was not cooperating with me but we did get to talk on the phone for a few minutes before she headed down the aisle.

Then we headed to be picked up to go on the Brisbane Whale Watching boat. 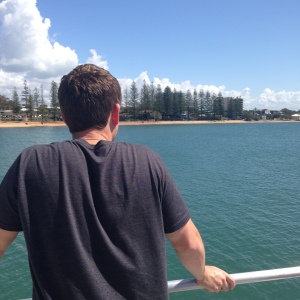 Once we got into the middle of the ocean (or as Travis referred to it “Humpback Highway”) we stopped for a few hours to see the whales. And that we did.. there were TONS of whales out on Sunday. It was hard to capture their fins as the breached and lunged, so we ended up with a lot of pictures of the water.

Needless to say by Sunday evening we were pretty worn out and got in bed by 9pm. Travis was supposed to be heading to Texas Wednesday, so since he was going to be gone a couple weeks I had gone ahead and planned a trip to Melbourne to visit my friend Erin. Trav’s class got cancelled so now he’s sticking around Brisbane as I head out of town for four days to see what Victoria, Australia has to offer.