** Heading to Bangkok soon and want to have this information at your fingertips? You can download this post on the GPS My City App here.**

Happy Travel Tuesday everyone! Today is my first week as a co-host for the link up, so make sure you add your travel/expat posts add the bottom of this post.

Two days before we were set to leave for Bangkok, I woke up to the news that a bomb had gone off in a heavily populated tourist area killing more than 20 people. After calling around to our hotel and travel agency we were reassured that we should go on with our plans, but I won’t lie the news put a dark cloud over the beginning of the trip.

We got into Bangkok around 8:30 on Thursday night and hopped into a cab. Our driver told us that normally it takes at least an hour to get from the airport to our hotel (same area of town as the bombing), but it took less than 30 minutes. The streets were eerily quiet and I saw very few tourists. It wasn’t the most reassuring welcome to the city but we vowed to make the best of it.

The next morning we had a tour planned with Tour with Tong to check out all of the Bangkok Highlights. We knew our time in Bangkok was limited since we were spending the following day at an Elephant reserve several hours away so we wanted to get the most out of our only full day.

Typically we like to see the sights on our own but for about $40 AUD Tour with Tong paired us up with a local guide who took us around and provided us with lots of information. For a few more dollars you can choose to have a car take you around as well but we preferred to take the public transport option since it was just two of us (and we wanted as much tuk tuk time as possible).

Sidetone: Once we were out and about the streets began to gradually come back to life. Our guide explained how important forgiveness was to the Buddhist faith and how the country wouldn’t let the bombing get the best of them. They would forgive and move on with a positive attitude. We visited the site later on in the day, the damage was almost completely repaired and there were many locals and tourists around praying and laying flowers down.

Our first stop on the tour was The Grand Palace and The Temple of the Emerald Buddha. 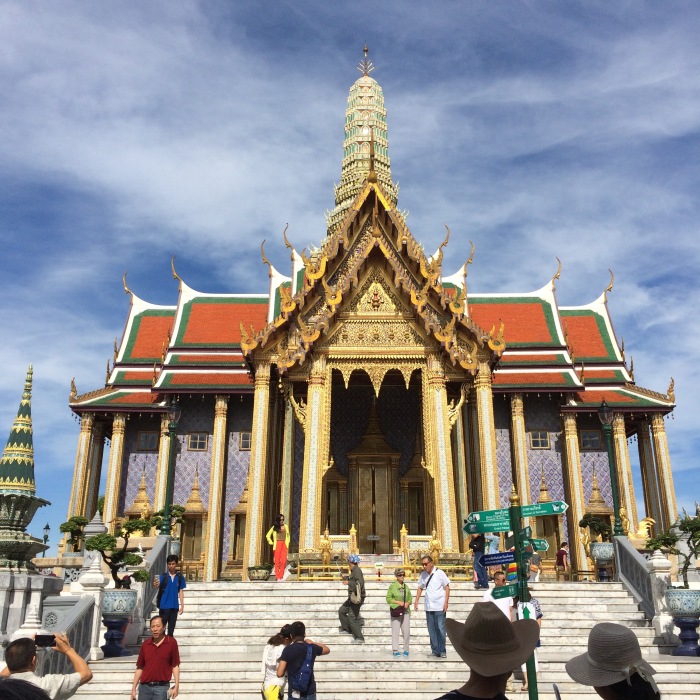 We got there just as they were opening the gates as to avoid the crowds. It worked too because I have heard many a horror story about how crowded it can get. If you plan on visiting temples in Thailand you must follow their strict dress code. You must be properly covered to enter or you will have to borrow their clothes (eek, no thanks). So even though it was quite steamy out we were trucking around in pants and 3/4 sleeves. You can read more about the dress code requirements here.

This was by far one of the most impressive places I have ever been. There were SO many different beautiful and intricate temples and statues to look at. Several times Travis had to reel me back in to listen to our guide because all I wanted to do was wander around and look at everything. 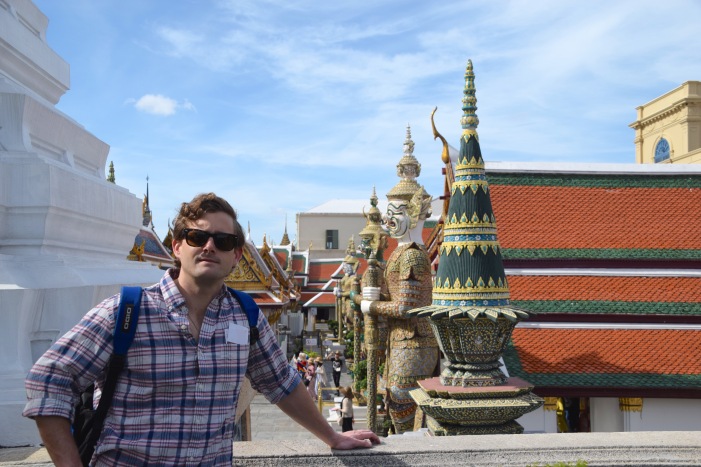 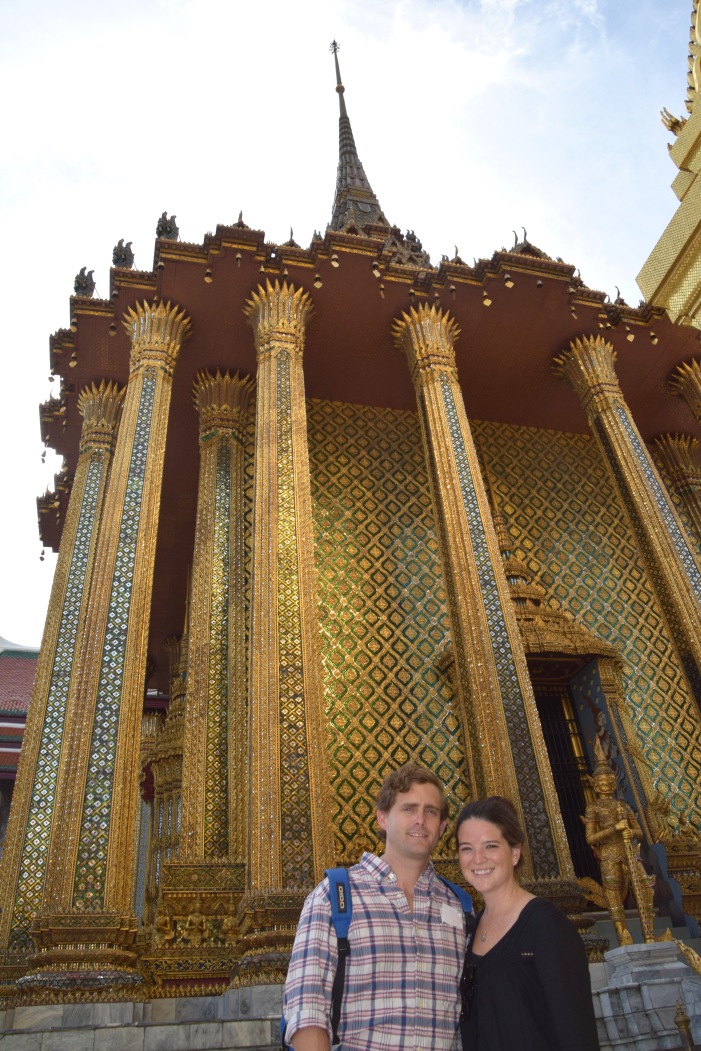 This was one of my favorite buildings. I loved the contrast of the white against all of the gold and dark colored temples.

We caught the changing of the guard at the Royal Palace and a tourist that got lost in the mix. A little different than in London where you can’t get nearly as close. 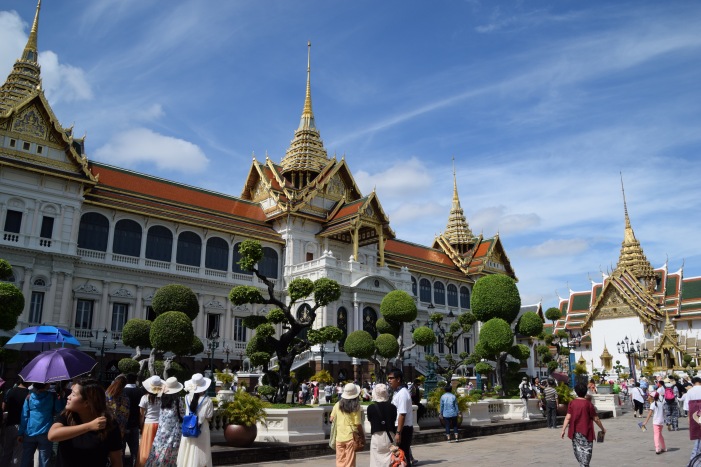 As we were leaving the Grand Palace the crowds were multiplying and I was so glad that we came early. Crowds+heat+selfie sticks everywhere = not fun. Next stop was Wat Pho or the Temple of the Reclining Buddha, which was less crowded.

Hall of many different buddhas. 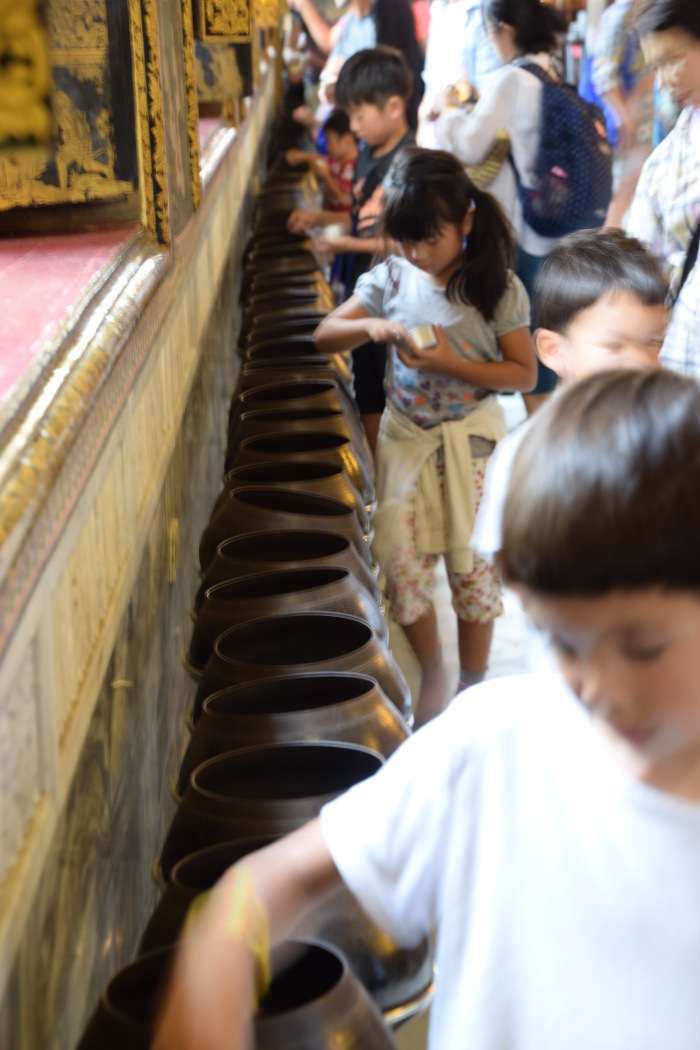 After walking around the two large temples, it was time for the canal tour. I had read several reviews of these types of canal tours online that pretty much deemed them a waste of time. This was part of the tour itinerary so I just went in with pretty low expectations.

After our guide paid a boat driver, we got into one of these long tail boats and quickly realized it was a private tour. With just the driver, our guide, Travis and I we headed down the busy canal. The first part was pretty much seeing the scenery we had seen around Bangkok all day. As we went further down the canal (where the bigger boats filled with tourists could not go) we saw a totally different side of Bangkok. Gone were the tall building and flashing billboards.

There was a whole world living amongst the river. Houses, businesses, temples all existing on the banks of the water. Woman in little boats rowed up to us offering us food and goods to buy.

I loved seeing the “street” signs in the river where it would split into small branches. 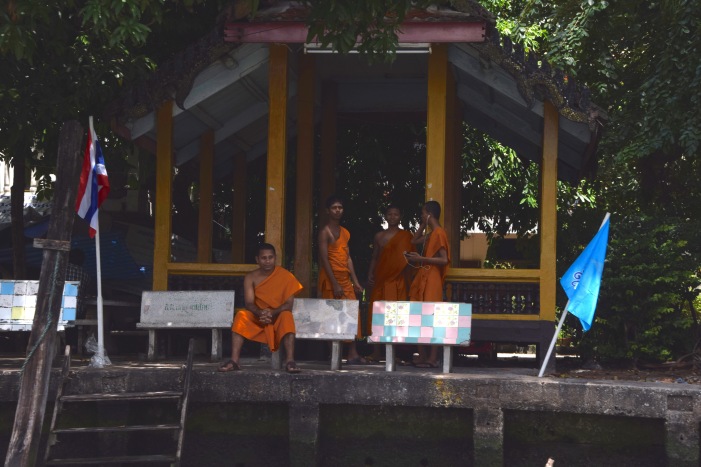 Just some monks in training listening to their iPods.

The canal tour was the perfect activity to break up our busy day of sightseeing. I am so glad we were able to see this side of Bangkok away from the tourist traps and busy shopping centers.

After the tour we stopped for lunch and continued on to see the Standing Buddha (Wat Indraram) and the Marble Temple. 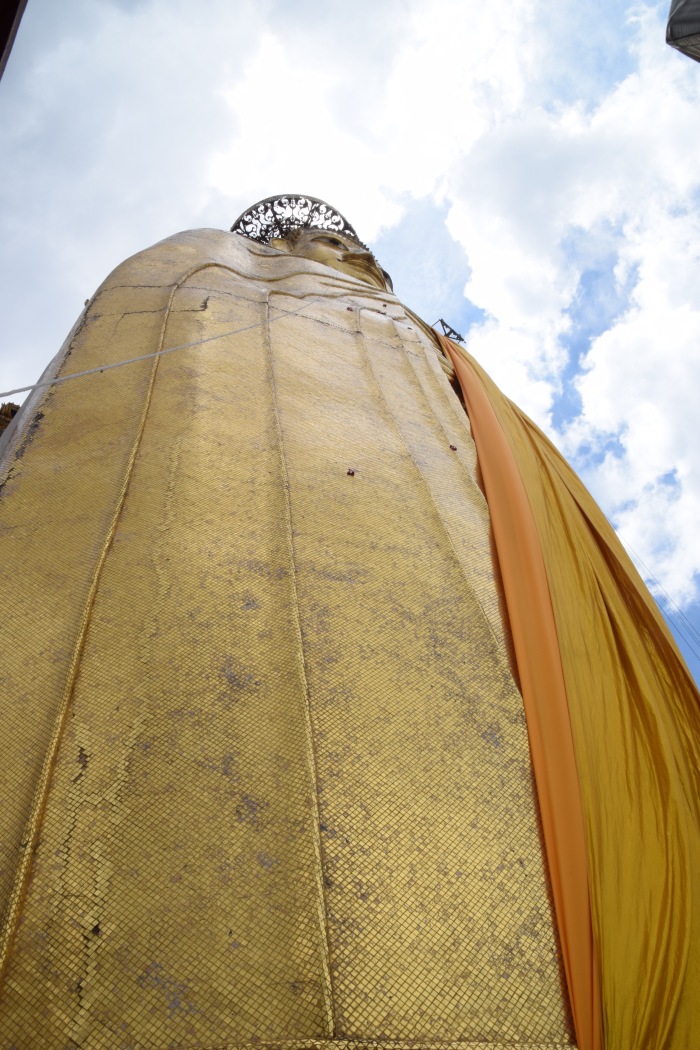 I had been wanting to see the Marble Temple after seeing a picture of it on Pinterest (of course). Unfortunately the weather and construction around didn’t allow me to get my pinterest worthy photograph, but we were able to look in on a ceremony for new monks that was taking place in the temple. 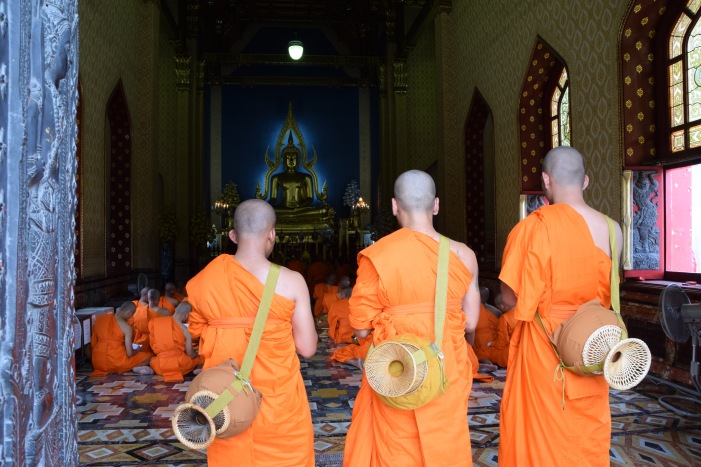 That night I accidentally led Travis and I to some sort of red light district after I had read online about a market for those interested in things “other than clothing.” My naive brain thought that meant accessories. It did not.

The following night we decided to check out the famous backpacker road, Khao San Road. 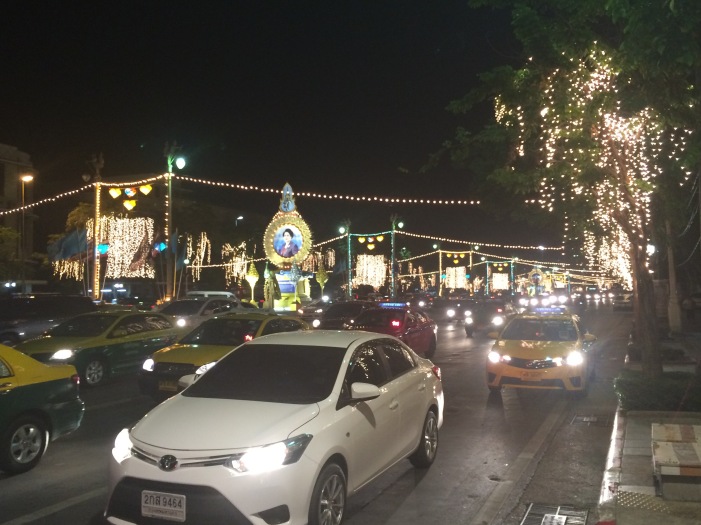 We got cheap beers and street food and chatted it up (and I danced) with other travelers from all over. Travis also ate a scorpion on a stick (see video below) which made me second guess his decision making skills. We had a great night, but one night was plenty of time on Khao San Road for us. 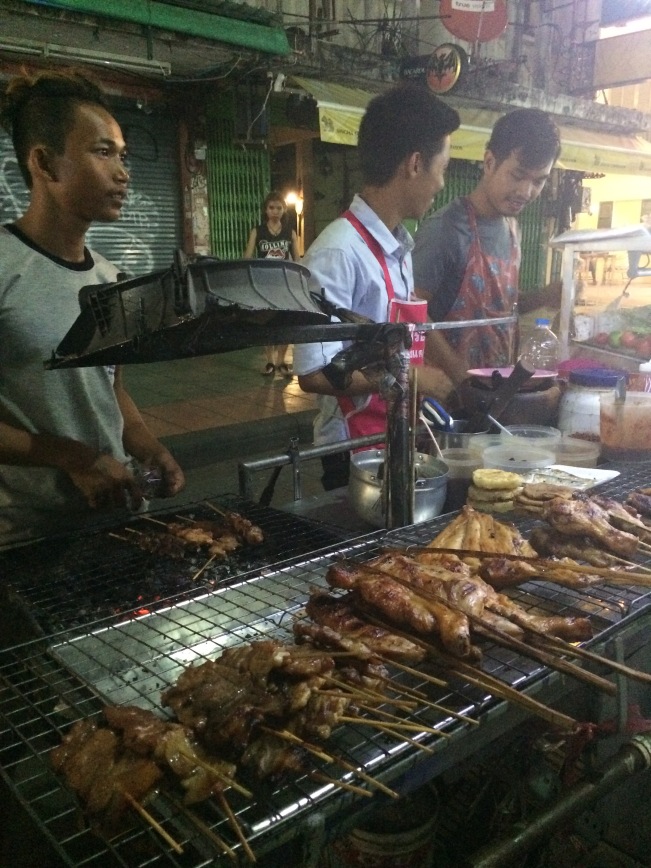 That’s all I have got for Bangkok, tune back next time to hear about our day at Elephants World!

Now it’s time for the Travel Tuesday Link Up with Bonnie from A Compass Rose!
1. SHARE a post about travel! From road trips to trips abroad and from past travels to dream vacations. You can write about travel tips and tricks, favorite places to stay, or anything in between! Just make it about traveling somewhere!
2. GRAB the lovely button above! And link back to your lovely hosts: Lauren and me
3. LINKUP goes live! Every Tuesday at 8 am GMT.
4. HOP around and meet new travel loving bloggers! Link up will be open for a few days, make sure to check back to visit some of the newer travel posts!
TIPS:
1. Please only one linked up post per blogger. Save other posts for future linkups!
2. The last Tuesday of every month will be a themed prompt if you want to join in!

Was this article helpful, or want to read it on the go? It is available as an app here. Check it out!