We no longer have a newborn people! Honestly, it’s a bit bittersweet. I’m sad at how quickly he’s grown, but at the same I feel like the fun stages are just beginning. 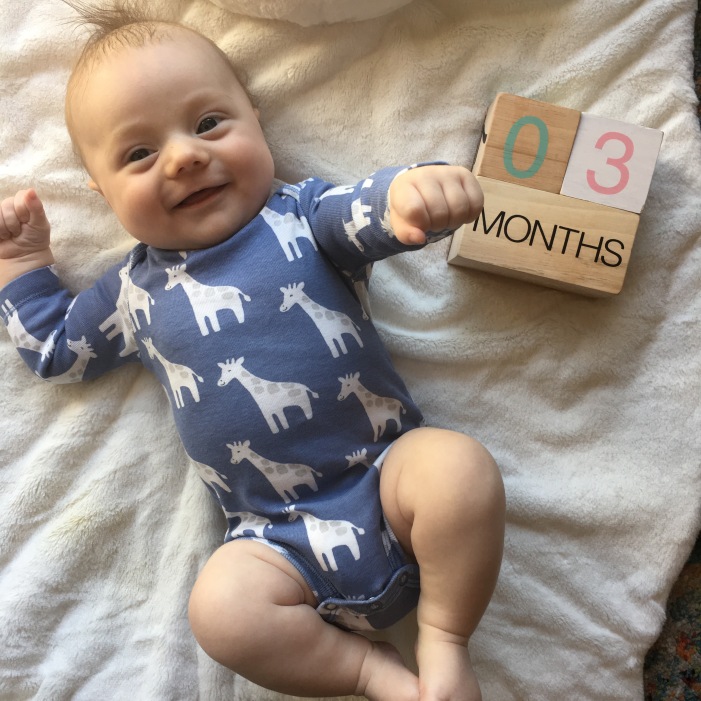 Houston is turning into the sweetest, happiest little guy and I seriously melt every time he smiles. For the most part he’s pretty content and calm unless he gets overtired or too hungry. As long as you stay on top of those two things, you don’t hear much from him.

He’s starting to “talk” and is sooo close to giggling. I can not wait to get some belly laughs. This month Houston got to meet his other grandma, Sassy, and celebrate his big sister’s birthday. He was such a trooper the whole birthday party and barely made a peep.

Now onto to the good stuff…

Most 0-3 month clothes still fit, although he is growing out of them and has grown out of all his 0-3 swaddles

His hair is starting to grow in but he still has a pretty crazy old man balding look going on. I’m just glad the Mohawk is still around.

His eyes are getting even lighter blue, so I’m thinking they are sticking around!

Still breastfeeding every 2.5-3 hours, but he will also take a bottle of formula or breastmilk if needed. We also weened him from his prescription reflux medicine when we started suspecting he didn’t need it anymore. He’s done just fine without it.

We have improvement! I took a newborn sleep class online when he was nine weeks (more on that under Favorites) and that helped a lot I think with techniques to settle him and resettle at night or day. Prior to that I was nursing him to sleep every time. Now he can self settle or use his pacifier to go to sleep without me (although if I get desperate I will still nurse to sleep).

Houston isn’t on a proper schedule yet but has a routine. He’s usually up for the day by between 6 and 7 and can only be awake an hour and a half before he is tired again. He takes 3 to 4 naps a day, one longer one and the rest are usually 40 minutes on the dot. His long naps (2-3 hours) are either in the carrier when we are out in the morning or in the afternoon during Leighton’s (which is always amazing when it happens). Then he goes to bed between 6:30-7 depending on his last nap. The past couple of weeks he just wakes a couple times (aside from a few off nights) around 12/1 and 4/5.

Houston still loves playing under either of his play gyms. I bought a plain wooden one for upstairs that we can swap out the toys on as well. He has figured out how to grab the rings and the sides of both of them, although he isn’t sure what to do once he has.

I am not the greatest at implementing tummy time, mostly because he isn’t a huge fan but he is slowly getting stronger. 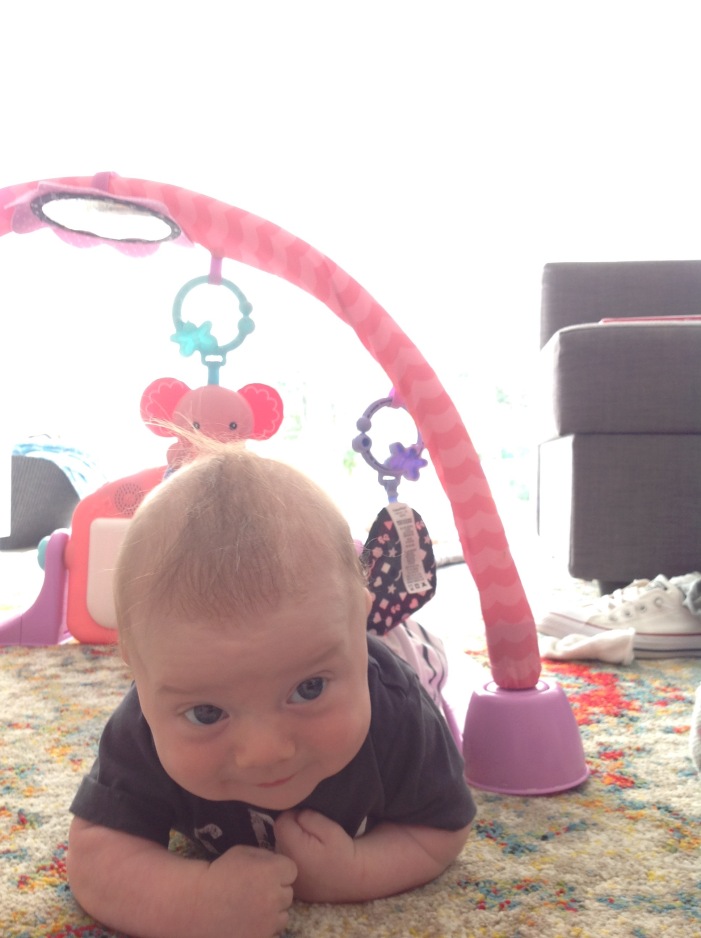 He loves the mirror and checking out his good looks.

Houston loves people watching and taking everything in. You better not hold him like a baby or with him facing you. He will be so happy when he gets to face outward in the Ergo. He rode in the infant seat in the grocery cart for the first time and LOVED it. Leighton on the other hand, didn’t appreciate how easy it made pulling her hair. 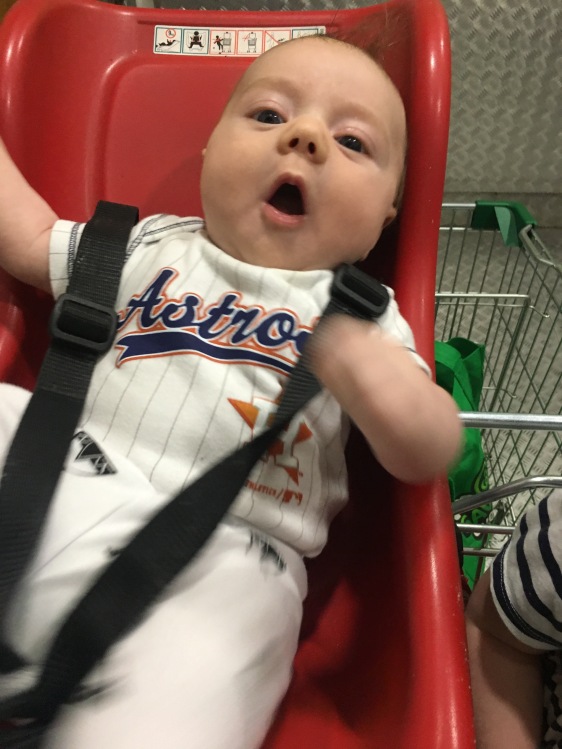 This month he started swimming (splash class) and loves kicking around in the water. It’s the same class Leighton took when she was his age, only now apparently it goes until 6 months instead of 4. Once Sandy (Trav’s mom) is back in Texas I will have to put them in the child care during each other’s class so that will be interesting.

The tummy tub is still a favorite. We also got a little bath seat for him so he can take bath with Leighton and he loves it too.

This is the sleep course I alluded to earlier. I took the newborn class and I highly recommend to new parents. I also recommend following Cara on Instagram because she gives so much good advice.

If you have ever tried to cut a new baby’s fingernails you understand how scary it is. I have cut both of my kid’s tiny fingertips, and after it happened with Houston I got online immediately and ordered a nail snail. I remembered the midwife at the hospital telling me about it and then saw someone on Insta recommend it too. All you have to do it glide the little “snail” along their nails and it catches it and trims it. It’s hard to explain but it works and it is way less scary!

Houston isn’t a huge pacfier lover (Leighton didn’t take one so we didn’t even buy any for him initially), but after taking the newborn class I have been using it more to help him drift off to sleep especially when we are out or he is fighting sleep. I love how the wubbanubs rest on their chest so they don’t fall out as easily. He does wake up if it starts slipping so I wait until he is asleep and steal it away.

and now for the three month photo dump…