Welcome to part 2 of my recap of our trip to Fraser Island (part 1 here).

When we decided to go to Fraser there was one place we knew we wanted to see, the stunning Lake McKenzie. The lake is in the middle of the island and is surrounded by white, silica (sand) so it looks like a beach. It is a perched lake meaning it is only rainwater and doesn’t feed into streams or flow into the ocean. The varying depths cause the water to be such beautiful blue and green hues that look like stripes.

We woke up Saturday morning and got ready to go to the lake. But first we had our first hiccup of the day which was me accidently ordering Travis a cold coffee. Whoops.

Even though it wasn’t a very far distance it took 45 minutes to Lake McKenzie on the bumpy dirt paths. Luckily we got there pretty early and almost had the place to ourselves. I wish that we would have gotten more pictures, but going along with the theme of the day, the camera battery died and someone (me) forgot to charge the backup battery. Whoops again.

Both Travis and I were pretty amazed at how beautiful the lake was. He commented that it was one of the few places that actually lived up to the pictures. I would rank Lake McKenzie up there with Whitehaven Beach as one of the most breathtaking places I have been. It just did not even look real.

After we splashed around in the water for a bit, the backpacker tour buses began to show up and it got more crowded. We got to see a lot of very staged Insta photos being taken. One group literally spent their entire time trying to get the perfect picture and one of the guys even asked me to move out of his shot once because I was ruining his super natural photo of him lounging in the sand in his speedo. They also were literally yelling at each other of these photos. People like that make me want to get rid of social media, but I won’t because just like them I am addicted.

After a while the clouds started to darken and pretty soon we were taking cover up by the bathrooms as the rain passed. 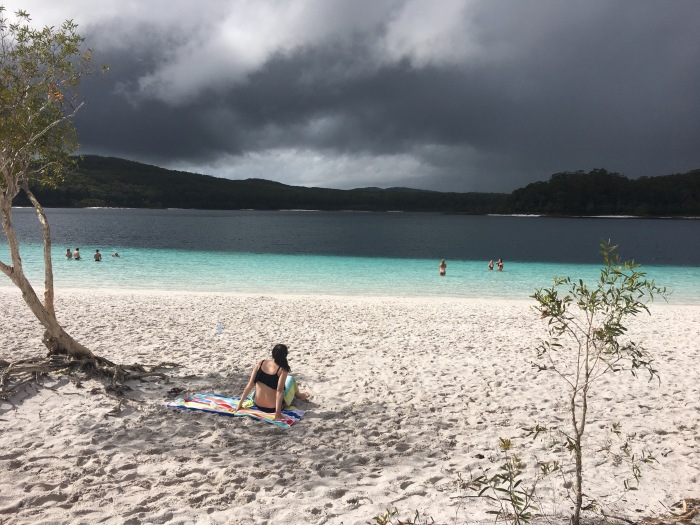 Luckily it was only a quick shower and then we were back in the sunshine. 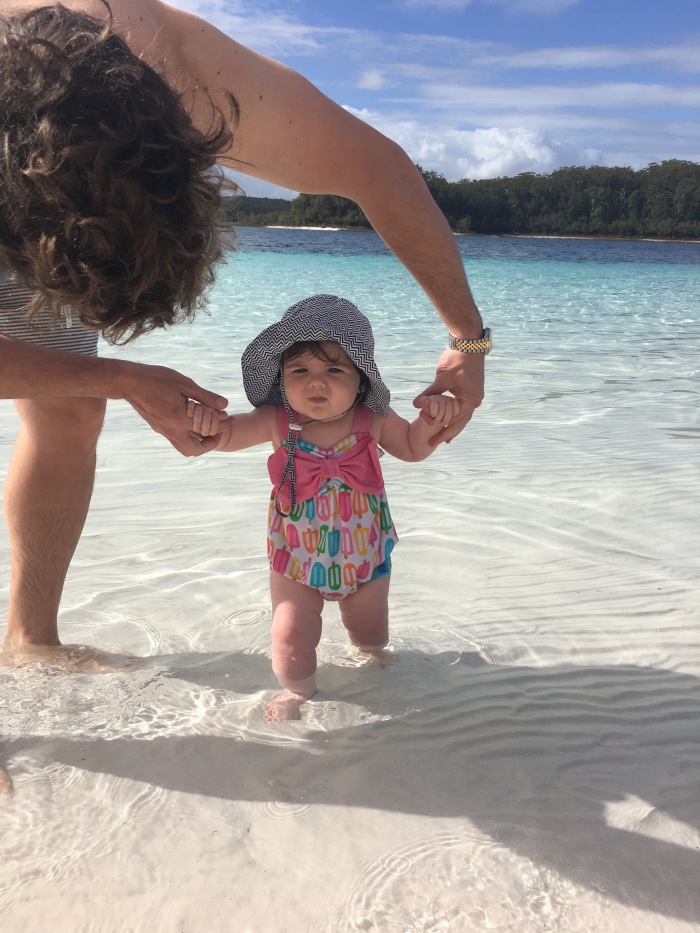 Leighton loved splashing around in the clear water and didn’t mind the cool temps as they were warmer than the ocean water she was in the day before. 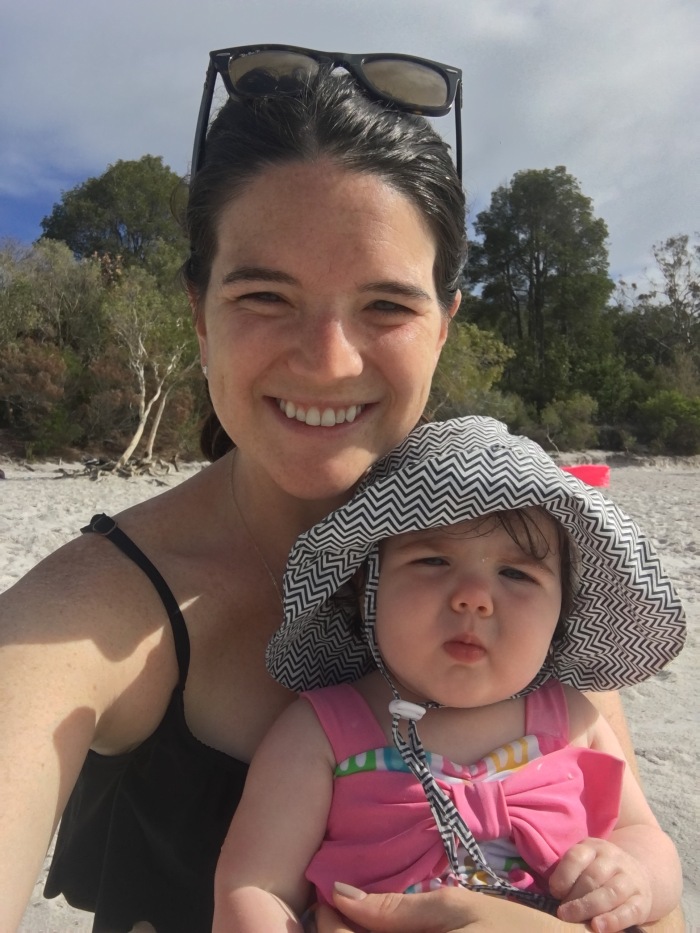 A couple more showers passed in between the sunshine before we decided to pack up and find a spot for lunch. You aren’t allowed to bring any food or drinks on Lake McKenzie because of the dingos, but there is a gated picnic area by the car park.

When we got to the car we realized we wouldn’t be going anywhere anytime soon, because it wouldn’t start. Several very nice people in the car park tried their hand at it but no one could quite figure out the problem. Fraser Island has very limited cell phone service so Travis had to find just the right spot to get one bar to call the road side assistance company. They didn’t have anything set up on the island, so they gave him the number to the tow truck company near our resort. 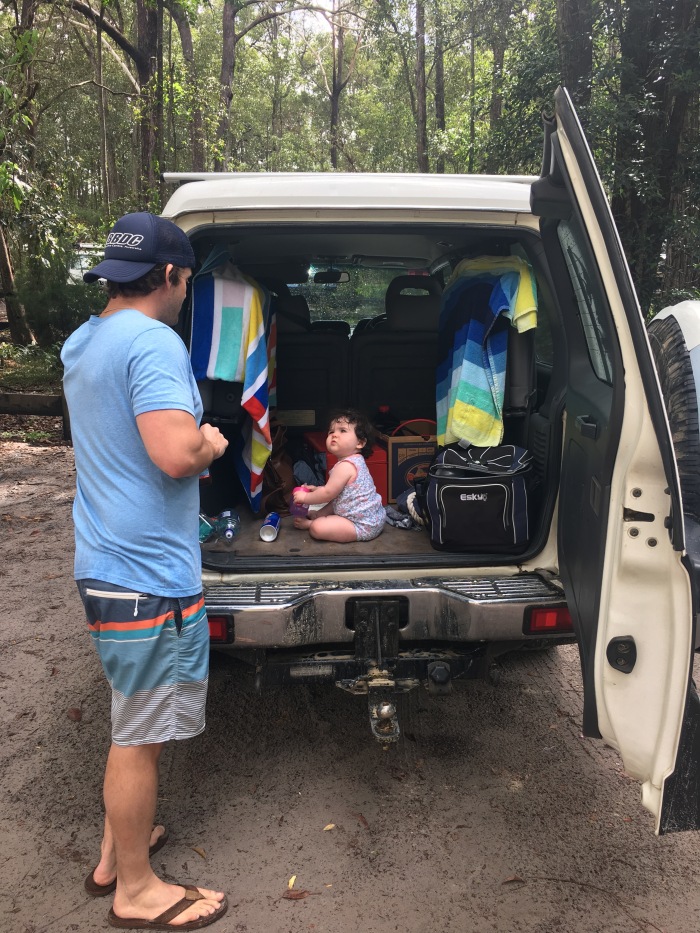 Since we knew it would be a while until the tow truck arrived we decided to go ahead and have our lunch. That’s when we realized we forgot the bread for the sandwiches at the hotel (that one wasn’t me). It was clearly just one of those days. One positive was how helpful everyone around us was. So many people came over and tried to help fix the car or figure out what was wrong. Several people came by and asked if there was anything Leighton needed since they could tell we were stuck. Gotta love Queenslanders!

Right before the tow truck arrived Leighton passed out (it was her nap time) and even stayed asleep for the first part of the ride bouncing around in the front seat of the monstrous vehicle. The tow truck driver said “when they called and said their was a baby with you I was like far out, this truck is a bumpy ride!” So yeah, super safe and definitely one for the baby book.

Once we were back at the hotel Travis and the mechanic messed with the car some more with no luck. We were already booked on a ferry the next morning but the tow company uses a different port to get to their shop in Rainbow Beach. Lots of google searches and phone calls to the truck’s owner (who was on the other side of the country for work) later we realized we were probably going to be leaving the island in the same tow truck and having to rely on people to give us a ride the 4 hour drive back to Brisbane. Not ideal.

We were all so worn out from the stress all three of us went to bed early without dinner. We were planning on trying out the onsite restaurant that night, so I can’t give you feedback on the food sorry! Also, Leighton peed on Travis (a lot) when he was getting her ready for a bath. Because how could that not happen on a day like that.

The next morning Travis woke up and decided to give it one more go and miraculously it started running! He gave it a few more test drives before we called the tow company to tell them we didn’t need them anymore. We were pretty nervous that we wouldn’t make it all the way home but luckily they let us keep the car running on the ferry and we didn’t shut it off until Brisbane.

It was a long drive home because poor Leighton got carsick for the first time on the way to the ferry so our car smelled like vomit, and she was pretty unhappy about being strapped in her car seat ( I don’t blame her). I don’t think we have ever been so excited to see our little apartment building. After all of that stress, there was only one way to end the weekend…

some wine and an early dinner not cooked by us.

Luckily we had such a great trip up until the car trouble that we couldn’t help but laugh at the series of unfortunate events. It seems we always have some sort of misadventure when we travel so it was only fitting that something would happen on this trip.

As usual, linking up with my girls Lauren, Marcella, Van and Isabel at Wanderful Wednesday.

One place that has been on our Australia bucket list since we moved here is Fraser Island. It’s the largest of the four sand islands in our state and actually the largest sand island in the world.

We finally booked in a trip the weekend after Easter. You have to have a 4 wheel drive on the island because there are no proper roads just muddy off roading and beach driving. Luckily Trav’s co-worker offered to let us borrow his for the weekend because they are not too cheap to rent.

Our ferry left at 10am so we had to wake up at the crack of dawn and head out the door. Luckily Leighton went straight back to sleep in the car until we stopped for a quick breakfast. From there we drove on the ferry and then hung out upstairs.