It’s that time of the week again…

But first, an announcement… instead of bombarding my personal page with blog post updates, I created a facebook page for the blog. Follow along here if you don’t already!

Last Saturday I attended my first professional Rugby game. We went to the 4 Nations Tournament and saw Samoa vs. England and New Zealand vs. Australia. It was so much fun and the best part was each game is only an hour and a half!  I’m going to write a post more on the game later, maybe I can even get Travis to chime in. 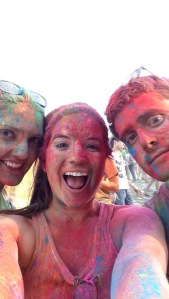 I already posted about Spring Flare here but it was definitely my favorite part of the week so I had to include it!

We got a car this week! For the past four months we have been relying solely on public transportation, our own two feet, bikes or random Uber drivers to get us around town. We finally gave in and decided to buy a car a couple weeks ago and went looking. We found a really good deal at Nissan for a new Almera (small sedan) that we couldn’t pass up. Only catch is it’s not automatic, which is not uncommon here. SO not only will I be learning to drive on the other side of the road but also to drive stick… Considering I was not the best driver in America (I once ran Trav’s truck into a toll booth) this is striking a lot of fear in Travis. So until I can schedule some legit driving lessons that car is staying put in the parking garage.

So after the Bridge to Brisbane race Travis signed me up for without my knowledge he wanted me to stay motivated to keep running with him in the mornings. As I mentioned in that post, I am not a runner. But I do like workout clothes. So we set a goal that when I ran 50 miles I could go buy a new pair of Lulu pants. Well this took way longer than I would like to admit but I DID IT. I finished this morning and promptly headed to the mall to purchase my reward. I wish I had thought of this motivation system earlier. 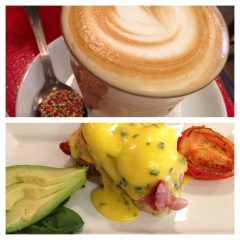 FYI Brekky is what they call breakfast in Australia if you didn’t gather that from context clues. We started a new tradition (and by tradition I mean we have done it twice now) when one of us goes out of town for a good while we go on a breakfast date before they leave. Travis left for Denver for a week for work so I bid him farewell over eggs Benedict and a latte. Anything to ease the pain of saying goodbye. But really- I’m already ready for him to come home.

Check out other Friday Favorites on the link up here…